Army First Sergeant William “Mike” Leonard was on his fourth deployment when he lost both of his legs in an improvised explosive device (IED) blast in Southern Helmand Province, Afghanistan on March 22, 2010. While escorting an Afghan Army squad back to base after they had participated in the initial phase of a search mission, the vehicle carrying 1SG Leonard and his teammates ran over an IED, the blast tearing into the vehicle.

Initially knocked unconscious by the force of the blast, Mike began calling for help to evacuate the vehicle, to “get the guys,” and remembers hearing voices telling him to lie down. In a coma for three days, and revived a total of three times, 1SG Leonard had no recollection of being in Bagram, Afghanistan or Landstuhl, Germany before waking up at Walter Reed Army Medical Center, his wife, Cheryl by his side. It was then that Mike learned that he had lost his right leg below the knee, seriously injured his left foot which eventually needed to be amputated, broken his back, and sustained loss of vision in his right eye and hearing loss.

1SG Leonard enjoys many sports including swimming, walking, running, and cycling. A NASCAR fan, he enjoys traveling to races and sporting events including baseball and football games. His interest in history was peaked while stationed in Europe between back-to-back deployments in 2003-2006 to Iraq. Time spent with family is important to both Mike and Cheryl. Their dog, Hogan is a constant companion who has never forgotten Mike, even after his long deployments and hospitalization. They also have a service dog named LB, who tends to Mike’s needs. He and Cheryl currently serve on HFOT’s Veteran Action and Advisory Team (VAAT).

Since his Key Ceremony in 2013, Mike says his home in Arizona has improved his and Cheryl’s lives greatly. They enjoy kayaking around the Phoenix area and hand cycling. They had a pool built, which Mike says is great for exercise and cooling off in the great, warm weather of Arizona. “Homes For Our Troops found us a perfect location that allows us to ‘just live’ and enjoy our new home to the fullest,” he says. 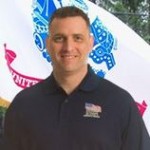