In 2008, Army Sergeant Nick Koulchar, a combat engineer, deployed with Task Force 1-6 to Iraq, and was attached to 1st Brigade Combat Team, 4th Infantry Division, for operations in and around Baghdad.

On Aug. 26, 2008, SGT Koulchar was conducting route clearance operations as a gunner of a vehicle, when an explosively formed penetrator (EFP) struck the side of his vehicle in Sadr City, Iraq. SGT Koulchar sustained the traumatic amputations of both of his legs as the blast tore through the truck.

Dragging himself through the vehicle to the rear exit door, he was evacuated by his platoon members who transferred him to another vehicle to be transported to a Medical Aid Station. Prepared for MEDEVAC, SGT Koulchar was airlifted by helicopter to central Baghdad where he endured a number of surgeries before being stabilized and airlifted to Landstuhl, Germany. Spending nearly two weeks in a coma, SGT Koulchar awoke on Sept. 10, 2008, to find himself at Walter Reed Army Medical Center where he remained for more than two years.

Nick does not let his injuries slow him down. He enjoys hand-cycling, hunting, lifting weights, and CrossFit training. He also has a passion for cooking, especially barbecuing and grilling. Nick and his wife, Dani, welcomed their first son in July 2016 and their second son in May 2018. They also have two dogs.

Since moving into his specially adapted home, Nick has started working as a Veteran Service Officer in the county. He often competes in handcycling races and is training for the Paralympics. He notes that his fully adapted home makes it easier for him to get on with his other endeavors.

When asked what he would like to say to those who support the Homes For Our Troops mission, Nick responded, “No matter how big or how small the contribution is, it shows that you care and that makes all the difference to those of us who return home requiring assistance. Thank you.” 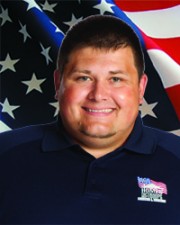