Kenneth Lyon was motivated to protect his country by the September 11th attacks. He joined the Marines as a light armored vehicle mechanic (LAV), and was assigned to the 3rd Light Armored Reconnaissance Battalion, deploying to Iraq twice – first in 2004 and again in 2006.

In May 2006, Sergeant Lyon was severely injured by a mortar attack near Fallujah, Iraq. He lost his left leg above the knee, and sustained irreversible nerve damage to his left arm and hand, and a shattered jaw.

When Kenny first returned home after his injuries, he often became frustrated when tasks like doing the laundry and showering became difficult because of a lack of accessibility. He could not use his wheelchair in his home because the doorways were too narrow. He was thrilled to receive a specially adapted custom HFOT home where he not only lived comfortably, but could focus on his future goals. Since receiving his home, Kenny was able to earn his degree in cybersecurity from the University of Mary Washington, and was hired by a cybersecurity firm. “Because all my daily physical struggles were mitigated, I was able to focus on what I could do, instead of what I couldn’t, and grow as a person,” he says.

Growing up in Connecticut and Maryland, Kenny chose to build his home in Fredericksburg, Va. He was grateful for his family and the support of his community and church. Kenny enjoyed working on cars and with circuits and wiring; his tools being counted as some of his prized possessions. He was thankful to have enough room in his garage to work on cars.

When asked if there was anything he would like to say to those who made his specially adapted custom home possible, Sgt Lyon expressed his thanks for the prayers and support that continues to help him in his recovery stating, “The impact you have cannot be overstated. My injury changed a lot in my life, but because of this home I am reminded daily of what I can do, vs. what I cannot. That feeling is my motivation to accomplish things. Thank you, again!”

Homes For Our Troops extends its deepest sympathies to the family and friends of Marine Sergeant Kenny Lyon, who passed away on Sept. 9, 2021. He was an important member of the HFOT Family, and was a focused, positive, and engaging friend. We will miss him greatly. 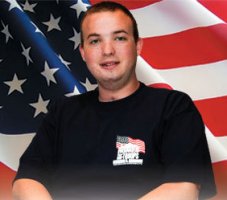