James S. Klingensmith Jr. joined his high school ROTC program as a freshman with the intention of following the footsteps of his father. When the 9/11 attacks occurred, his decision to serve in the Army became finalized.

On August 13, 2009, Sergeant Klingensmith was on his third deployment serving as the senior squad leader for Charlie Company, 1st Platoon, 1st Squad, 3-61 Cav, 4th Brigade Combat Team, 4th Infantry Division, in Kunar Province, Afghanistan, when his vehicle was hit by rocket-propelled grenades (RPGs). The driver was severely injured in the blast, so James gave orders to fall back while he engaged the enemy to rescue the driver. As they made their way to safety, an RPG exploded next to him, severely wounding him. His comrades were able to retrieve him and bring him to the air evacuation site.  He was eventually transported to Landstuhl, Germany. After several limb salvage surgeries, he was sent to Walter Reed Medical Center. On September 16, 2011, doctors amputated James’ left leg below the knee.

Now medically retired, James’ injury has not slowed him down and he has become active in adaptive sports, including bobsledding on the National USA Team. Though James excels on the bobsled track, he still experiences obstacles within his own home. His current home is not accessible, making it difficult to use a wheelchair. On days where he is not able to wear a prosthetic, he is limited to one room which makes daily activities challenging.

In a specially adapted custom Homes For Our Troops home, the single-level open floorplan will enable James to regain a sense of normalcy. The freedom and independence of the home will give him more time and energy to train for the Paralympics. He also enjoys golf and shooting, and is looking to eventually open up his own automobile repair garage. He will also be able to pay it forward with volunteer work at The Hero’s Journey, a nonprofit that works with service members and their families to provide support and education as they find their voice, and begin to transition at home and in their community.

Originally from Florida, James is choosing to remain in the state to be close to his family.

James says he is grateful to HFOT’s donors and supporters. “I think the biggest thing an adapted home will give me is a sense of freedom that, even on the days I can’t use my prosthetic, I know I can still easily accomplish daily activities.” 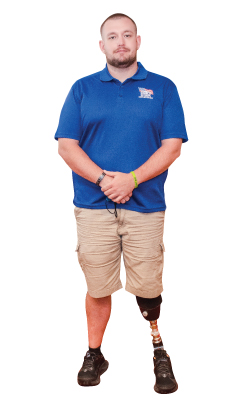