Marine Corporal Jeffrey Kessler was on his third deployment when he lost both of his legs above the knee and sustained the partial amputations of fingers on his right hand after stepping on an improvised explosive device (IED) in Helmand Province, Afghanistan on July 13, 2011.

While clearing a compound with his team, Cpl Kessler stepped into the fourth living area of the compound to begin a sweep of the room when his right foot hit the pressure plate of a twenty pound IED. The force of the blast blew Cpl Kessler across the room, traumatically amputating both of his legs and nearly amputating the fingers on his right hand.

While trying to reach his radio to call for help, Cpl Kessler crawled out of the blast area where the corpsman began treating his catastrophic injuries. Pulled to safety by his team, Jeff never lost consciousness as the landing zone was cleared and they waited for a helicopter to transport him to Camp Bastion.

Next airlifted to Landstuhl, Germany, Cpl Kessler arrived at the Walter Reed National Military Medical Center in Bethesda, Maryland four days after the blast; his wife and two young sons by his side.

An athletic lifestyle has afforded Jeff the ability to advance rapidly through his therapies; walking, running, and biking with his prosthetics have all been challenges that have been achieved. He enjoys working out, football, and fishing, and is active with the VFW. He hopes to acquire a position with the U.S. Government at the Aberdeen Proving Grounds in the future.

Jeff enjoys spending time with his wife Morgan and their three sons and daughter. Friends since high school, they are enjoying their new home and say it has dramatically changed their lives. Jeff can now get around every room in his wheelchair and doesn’t have to worry about hitting his hands on walls and doorways. “When you commit to building a home for a Veteran you not only help the Veteran, you help the families,” says Morgan. “We are so happy he doesn’t have to worry about his mobility anymore and can focus on family.”

Jeff appreciates all of the support and assistance from donors and volunteers who made his specially-adapted home a reality; allowing him to live his life without barriers in his own home. “Thank you for making my family’s future easier. Owning a home built specifically to my needs would not have been possible without Homes For Our Troops. Dreams do come true and HFOT is helping with ours.” 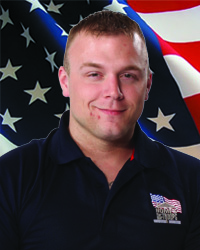