On June 13, 2011, Marine Sergeant Marshall Kennedy was on his fourth deployment when he lost both of his legs and sustained severe damage to his left arm after stepping on an improvised explosive device (IED) in Sangin, Afghanistan.

The Squad Leader on a routine clearance mission, Sgt Kennedy and his team were informed by Afghan locals that a weapons cache was in a compound nearby. After calling for the Explosive Ordnance Disposal team (EOD), Sgt Kennedy and his squad began checking another compound in the area. While keeping an eye on his Marines ahead and those behind him as well, Sgt Kennedy positioned himself to assess the situation and while doing so, his left foot hit the pressure plate of an IED.

Thrown through the air and into a nearby wall, Sgt Kennedy remained conscious throughout the ordeal. His legs traumatically amputated, his Marines and the Corpsman worked to save his life. Transported by his team’s Mobile Section, Sgt Kennedy was taken to a shock-trauma platoon at FOB Jackson. Later flown to Camp Bastion, followed by Bagram Air Base, he was next airlifted to Landstuhl, Germany before arriving at the Walter Reed National Military Medical Center four days post-injury.

Marshall enjoys hunting, shooting, and NASCAR. He especially loves spending time with his wife Chelsie and their three young sons. In 2017, Marshall continued serving his country again as a computer forensics analyst with HERO Child-Rescue Corps. Chelsie has finished her bachelor’s degree at the University of Arkansas and is now working on her master’s at the University of Southern California.

Marshall is appreciative of the support he’s received from Homes For Our Troops supporters and donors. “Thank you for all you have done to make this possible. Living in a specially adapted home provided by Homes For Our Troops makes our transition to civilian life and our daily living so much easier. This is truly a blessing for our family. Thank you for this opportunity,” he says. 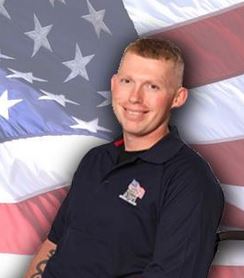