Homes For Our Troops extends our deepest sympathies to the friends and family of Army Medic SSG  Kelly Keck, who passed away Thursday, March 13, 2014.

Kelly was on his first deployment to Afghanistan when he lost his right leg and sustained severe hand injuries while providing medical treatment to injured Soldiers on September 13, 2008.

Through the efforts of hundreds of volunteers from the community as well as sponsors and donors throughout the country, SSG Keck received the keys to his Maryland home in March of 2013.  After receiving his home, Kelly remained involved with Homes For Our Troops, often speaking at the ceremonies for other Veterans. In addition to working at Aberdeen Proving Ground, he enjoyed spending time with his daughter Zoya, and was a fan of fishing and model building.

Kelly was a valued member of the HFOT Family, and we will miss him greatly. 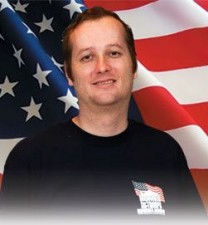