Always having a desire to serve in the military, Preston Kaplan joined the Army as an Infantryman right after high school. He deployed to Iraq twice, first in 2005 and again in 2007.

On April 29, 2008, during his second deployment, Sergeant Kaplan was on a mounted mission with 1-502d Inf, 2nd Brigade, 101st Air Assault Division, when an explosively formed projectile (EFP) struck his vehicle. The blast resulted in severe damage to his right leg.

Preston underwent over 60 surgeries within 18 months trying to salvage his right leg before making the decision to have it amputated. He acknowledges his recovery was still challenging after the amputation, but Preston was determined to persevere and motivated to improve. By 2011, he was able to walk again on a prosthetic. Preston does quite a bit more than walking now – he runs, scuba dives, skydives, golfs, fishes, and hunts. He also trains in Brazilian jiu-jitsu at Gracie Barra Texas. “I’ve had a lot of ups and downs, but I’ll never give up and stop going because of my injury,” he says.

Though Preston has returned to doing the activities he loves in the sky and on land, his previous home remained a battleground. His wheelchair did not fit, which prevented him from performing simple tasks like pouring himself a glass of water. His specially adapted Homes For Our Troops home with an open floorplan and accessible kitchen with pull down shelves and roll under sinks alleviates these issues.

The home is also beneficial for Preston’s future plans with his wife Nicole, a former Non-Commissioned Officer in the Army. The financial freedom of an HFOT home enables them to focus on raising their growing family. Preston and Nicole welcomed their first child, Eliana, in 2018.

Preston has obtained two degrees in process technology and manufacturing engineering from Lee College and in 2021 began an internship with LyondellBasell, one of the largest plastics, chemicals, and refining companies in the world. The company is his number one choice in that career field. Additionally, he started an apprenticeship in Free Masonry in 2021. He also enjoys volunteering in his community and supporting fellow Veterans. He is involved with Mighty Oaks, a faith-based organization that supports Veterans. Additionally, he has shared his story at fundraisers for Disabled Sports USA and War Fighter Sports. Preston and Nicole has also run for Team HFOT.

Preston and Nicole say HFOT is a blessing and they are incredibly grateful to the organization’s donors and supporters. “Homes For Our Troops is a game-changer. We feel so fortunate to have this opportunity,” he says. “It is your gracious donations and support that enable us injured Veterans to regain ourselves and continue to become providers for our families.” 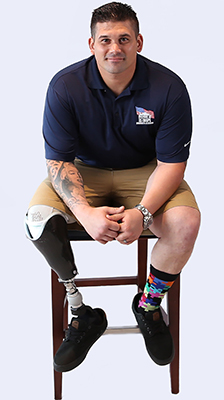