Jeremy Young wanted to join the military his entire life. After working a warehouse job for two years after high school, he felt it was time to do something more meaningful. He joined the Army in 2010 as an Infantryman and was assigned to the 2nd Battalion, 5th Infantry, 3rd Brigade, 1st Armored Division.

On July 3, 2012, during his first deployment, Specialist Young and his unit were in an over watch position in Eastern Afghanistan when an Afghan Soldier turned on them, shooting at SPC Young and four others. SPC Young was just a few feet away from the attacker, who shot him 18 times. The gunshot wounds caused severe damage to SPC Young’s right leg, right hand, left hand, and left arm.

Once back in the United States, Jeremy endured numerous surgeries and therapies at Brooke Army Medical Center in San Antonio. While in the hospital, Jeremy met his wife, Kayla, whose brother-in-law was in the incident with Jeremy, and the two formed a connection there. After attempting limb salvage, doctors amputated his right leg in December 2014.

Now medically retired, Jeremy and Kayla love spending time together outside with their dog. The two became parents to a baby girl in February 2022, but Jeremy’s excitement about this new chapter was clouded with concern when living in his previous home. One of Jeremy’s biggest fears was that he would fall while carrying his daughter up the stairs. Because Jeremy’s previous home was not wheelchair accessible, he had to constantly wear his prosthetic, causing intense pain and discomfort. It was especially frustrating for Jeremy to be restricted physically since he led an active lifestyle before his injury. His single-level, specially adapted custom Homes For Our Troops home mitigates these worries. Kayla is relieved they are now living in a place where her husband is happier and more comfortable.

Now that Jeremy is in the home, and is not coping with the daily pain from his prosthetic, he has more energy for helping other Veterans in the area and volunteering. He would like to start a Ruck March fundraiser to pay it forward to organizations that have helped him, including Homes For Our Troops.

Originally from North Carolina, Jeremy chose to remain in the state to be close to family and healthcare.

Jeremy wants HFOT’s donors and supporters to know this home immensely improves his daily life. “Thank you for what you’re doing for injured Veterans across the country; you’re changing their lives and mine,” he says. 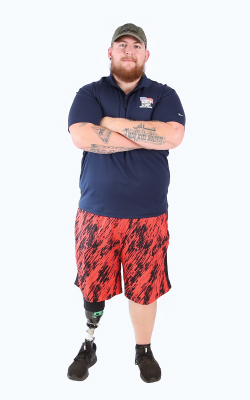