Marine Sergeant Julian Torres was crossing a canal in Marjah, Afghanistan after a morning firefight when he stepped on an improvised explosive device (IED), resulting in the loss of his left leg below the knee and his right leg above the knee. The injury occurred on July 15, 2010, ­just one month after his first deployment.

Sgt Torres was providing rear security to his fellow 2nd Battalion 6th Marines when a teammate noticed a small piece of cloth (IED indicator) tied to a shrub near a bridge. Sgt Torres then parted from his formation to inspect the cloth and its surroundings, and consequently dismissed the IED’s presence since the area of operation was deemed low IED threat. He continued scoping trees where he thought positioned enemy fighters were likely to be. As he headed back over the bridge to rejoin his patrol, an IED detonated below him, traumatically amputating his right leg above the knee and left leg below the knee.

As Sgt Torres began crawling back to his team, members began tracing back their steps to ensure they did not detonate other potentially hidden IEDs in the area. As two marines initiated life-saving measures on Sgt Torres, including dumping their remaining water on his legs and applying tourniquets, the exchange of gunfire heightened to a counterattack with enemies moving in on their position. Sgt Torres was medically evacuated from the field to Camp Dwyer where he was stabilized and then airlifted to Camp Bastion Hospital and then flown to Landstuhl, Germany. He was then transported to Walter Reed where he began receiving his initial rehabilitation surgeries and therapies.

Among Sgt Torres’s “absolute joys in life” are spending time with his wife Ashley and son Julian Lucas, who was born just two weeks before his deployment, and his daughter Analicia. He enjoys weight lifting, cooking, and barbecuing. Sgt Torres is also an avid supporter of Veterans in his community; he runs an inpatient PTSD rehabilitation program and biweekly patient peer support group at Balboa Naval Medical Center. His immediate goals include attending San Diego State University to obtain his master’s degree; his long-term goal is to become a public speaker. Above all, though, he says his paramount goal is to maintain a loving relationship with his wife and family.

Since receiving his home in 2014, Julian has taken up mountain climbing. On Veterans Day 2015, he reached the top of Mt. Kilimanjaro. He is also paying it forward to other HFOT Veterans by serving as a member of HFOT’s Veteran Action and Advisory Team (VAAT). Julian homeschools his son and Ashley is pursuing a master’s degree in social work with aspirations to work with middle school age youth when she graduates.

Sgt Torres says finding out about Homes For Our Troops has been like finding “a diamond in the rough.” Adds Sgt Torres, “We tried the traditional way of getting a home and it is nearly impossible to find a home that doesn’t need complete remodeling.”

Sgt Torres would like to thank all those who contributed to making the dream of home ownership a reality for him and his family. 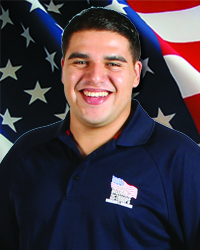