Both of Eric Jordan’s grandfathers served in the military, and they inspired him to follow in their footsteps and serve his country. The 9/11 terrorist attacks contributed to the final push for Eric to enlisted in the Army as an Infantryman.

On November 11, 2004, during his deployment in Ramadi, Iraq, Army SPC Jordan’s vehicle was hit by an improvised explosive device (IED). A friend who was part of the QRF (Quick Reaction Force) performed life saving CPR on Eric. The blast resulted in multiple injuries including spinal cord injury (SCI), paraplegia, and tinnitus. Eric says he does not remember much about his transport from Iraq to Walter Reed Medical Center. Being from Tampa, he was ultimately transferred to the Tampa VA where his recovery was trying and difficult. He had to cope with not being able to walk and could not put his thoughts into words due to his TBI. After several months of therapy and strong determination, Eric was able to speak again. He continued private therapy which focused on building his body and confidence back. The program empowered Eric to feel strong and renewed.

Now medically retired, Eric enjoys spending time with his wife, Stephanie, and exploring the outdoors. Although Eric has made progress in his recovery, he still experiences obstacles in his home. A specially adapted custom home will alleviate the safety concerns that come with performing daily tasks like taking a shower. Because his home is not adapted to his needs, if there was a fire in their apartment building, Eric would not be able to leave the building on his own.

The special adaptations throughout their HFOT home will help Eric and Stephanie save time in their daily routines, and will help him reach his full potential. They look forward to the quality time they will be able to spend together. With roll under counter tops, Eric will be able to cook on his own without risk of injury.

Originally from Florida, Eric is choosing to build his home in Colorado for the medical care and to live close to friends.

Eric is thankful to HFOT donors and supporters and says an accessible home would be life-changing. “It’s hard to put a value on regaining independence. The gift of a home is beyond what I can put into words. My wife and I would be able to reach a quality of life that has been out of reach for some time.” 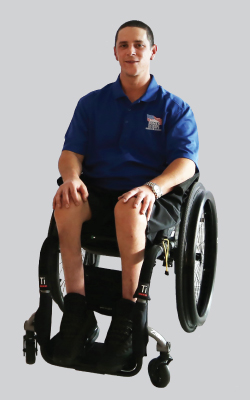