Army Sergeant Aaron Jolly was on his second deployment, serving as a sniper with the 10th Mountain Division, when he was left paralyzed from the waist down in an improvised explosive device (IED) blast in Pakhabe’ Shana in Eastern Afghanistan on March 19, 2011.

The driver of a Mine Resistant Ambush Protected vehicle (MRAP), SGT Jolly and his teammates had entered the village on a mission to bring Afghan and Jordanian soldiers to inspect the four local mosques for structural repairs, and bringing soccer balls to the village children. Upon arrival they received a cool reception from the village elders and rocks were thrown over mud walls by the local youth. A group of villagers diverted the convoy to exit through an alley, purposely sending them to the location of the buried IED.

Airlifted to the local hospital, SGT Jolly required resuscitation before enduring his first two surgeries. He was flown to Landstuhl, Germany two days later. Arriving at Walter Reed Army Medical Center on March 27, SGT Jolly was treated in the ICU and Neuroscience ward before being transferred to the James A. Haley VA in Tampa where he remained for seven months.

Since moving into his Homes For Our Troops home, Aaron worked for a company in the area that assesses and refurbishes military equipment. He has since retired from the job and is now intently focused on rehab in order to regain the ability to walk. He can now walk short distances with the aid of a walker. The open floor plan and wide doorways allow him enough room to practice exercises in the comfort of his own home, in addition to attending physical therapy several times a week. He has also become more active in his church and helps coach the church softball team. Aaron has also been able to focus on his recovery, thanks to his specially adapted environment. 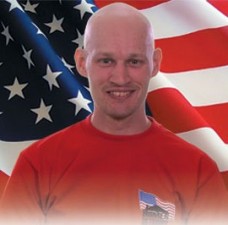