In June 2007, Army Sergeant Tim “TJ” Johannsen was on his second deployment as an artilleryman with the 1st Battalion, 9th Field Artillery, 3rd Infantry Division, he lost both legs from an improvised explosive device (IED) explosion in Iraq. Shortly after a position rotation which placed him as the driver of an HMMWV, SGT Johannsen’s vehicle rolled over a pressure plate IED that exploded through the floorboard, immediately amputating his right leg below the knee and his left leg above the knee. Quick reaction by the medic and medevac team saved TJ’s life as he was stabilized and transported to a local hospital before later being airlifted to Landstuhl, Germany, and finally to Walter Reed Army Medical Center where he remained for two and a half years.

SGT Johannsen enjoys spending time with his wife Jackie and their two children. He loves outdoor activities including, golf, fishing, biking, and snowboarding. He likes drawing and reading as well. TJ would like to complete a master’s program in prosthetics and work in the field of prosthetics, helping others who are learning to live with the daily challenges that are now his “new normal”.

TJ appreciates all of the support he has received. He says that the assistance provided by Homes For Our Troops is life-changing; enabling him to be more independent and comfortable in his own home. One of his favorite things about his HFOT home is that it has allowed him and Jackie to be stay-at-home parents for their two boys.

In the years since receiving his home, TJ has paid it forward to other Veterans by hosting a golf tournament fundraiser for HFOT each year. He is also involved with the Vail Veterans Program, a nonprofit program that helps injured Veterans rebuild confidence through rehabilitative sports and recreation activities. 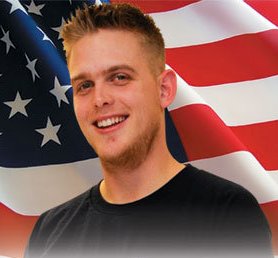