Watching his uncle get off the plane returning from Desert Storm, Johnny Morris knew then he wanted to serve as well. Years later, when he was in high school, witnessing the September 11 terrorist attacks solidified his decision. Johnny joined the Marines as a heavy equipment mechanic and eventually switched specialties to explosive ordnance disposal (EOD). He deployed to Iraq in 2007 and then to Afghanistan in 2009 and 2011.

On July 2, 2011, during his third deployment, Staff Sergeant Morris was the EOD team leader on an improvised explosive device (IED) defeat mission in the Sangin River Valley, Afghanistan, when he stepped on an IED. SSgt Morris sustained severe damage to both his legs in the blast, including the traumatic amputation of his left foot.

Once transported back to the United States, Johnny spent months undergoing surgeries on his legs. Doctors eventually amputated his left limb further, which made it easier for Johnny to wear a prosthetic.

Medically retired, Johnny is now a charter fishing captain, and busy raising his two children, Gage and Gabrielle, with his wife, Natalie. He volunteers with several Veteran organizations and, in his spare time, enjoys fishing, hunting, archery, and shooting.

Though Johnny has come a long way since his injury, his current living environment presents many obstacles in his daily life. Because his home cannot accommodate a wheelchair, Johnny must use his crutches most of the time when he’s not wearing his prosthetic. Johnny often becomes frustrated that he has difficulty tending to his children at night, and much of the responsibilities fall to Natalie. Receiving a specially adapted custom Homes For Our Troops home with an open floorplan and wide hallways and doorways will enable Johnny to access every room in his wheelchair. The home will give Natalie relief, as she is afraid to leave Johnny alone for fear he could further injure himself by balancing on one leg or falling on his crutches. Most importantly, regaining his freedom and independence within the home will enable Johnny to focus on providing a better life for his family because he will no longer be in constant pain. “Using my wheelchair at home will greatly reduce the amount of time I spend on my one good leg,” he says.

Originally from Alabama, Johnny is choosing to remain in the state and build his home there to be close to family.

Johnny wants HFOT’s donors and supporters to know how much they improve severely injured Veterans’ lives. “It is very hard to go from the best shape of your life, being in charge of keeping your brothers safe in a war zone, to needing constant help with everything. It can be overwhelming. These homes help to regain some of the independence that we miss and crave. Thank you very much.” 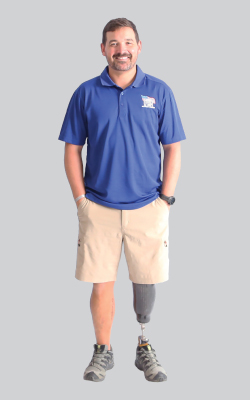