On March 3, 2012, Army Specialist Jose Martinez was on a foot patrol with members of the 2/3 Infantry Division in Kandahar, Afghanistan. While attempting to aid a Soldier seriously injured in a blast, he stepped on another improvised explosive device (IED). The subsequent explosion resulted in the loss of both legs, his right arm, and partial amputation of his left hand. SPC Martinez remained conscious throughout the ordeal while his teammates worked heroically to save his life, readying him for airlift to the hospital.

SPC Martinez endured dozens of invasive surgeries and months of aggressive therapies in the months that followed his injury. The most frustrating aspect of his recovery, he says, was the recurring infections that seem to set in just as he was making strides in learning to walk on prosthetics.

Now medically retired, Jose is married to his wife Liseth, who has been by his side throughout his recovery. The two previously lived in a second-floor apartment, which was not wheelchair accessible. SPC Martinez sustained a right hip disarticulation that makes balancing and walking difficult and requires him to spend more time in his wheelchair due to fatigue and soreness. Jose can now navigate his wheelchair around a full-size kitchen where he can enjoy cooking once again and does not have to worry about reaching for ingredients or utensils in high cabinets. Additionally, he faced daily challenges with his previous bathroom when transitioning from the shower back to his wheelchair. The freedom he receives from a specially adapted home addresses all of these concerns.

In his spare time, Jose enjoys exercising, swimming, surfing and cheering on his favorite team – the LA Lakers. He is involved with his local chapter of the Veterans Sportsman Alliance, a nonprofit that provides activities for wounded Veterans, including hunting trips, fishing, and working on cars. He is also focused on finding ways to help others.

Jose and Liseth would like to thank everyone who got involved with his home build project. Says Jose, “The support everyone gave us makes me have faith in mankind.” 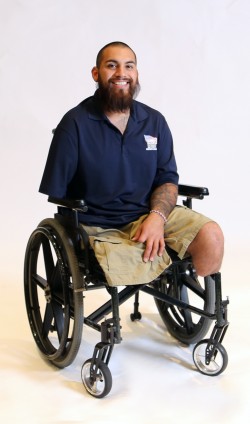