Jose “Joe” Lopez joined the Army to support an ill family member. He enlisted in 2005, deploying to Afghanistan in 2007.

On Jan. 3, 2008, during his first combat deployment, Sergeant Lopez was serving as a cavalry scout with the 4-73 CAV, 82nd Airborne Division, when he fell into a burning pit while pushing a child out of the way of a rolling vehicle. SGT Lopez sustained severe burns to over 30 percent of his body, crushing injuries to his legs, and smoke inhalation.

After a week of being treated at Brooke Army Medical Center in San Antonio, Joe’s lungs collapsed, and he spent months in a coma. Doctors told Joe’s parents that if he survived, their son would not walk or talk. After nine months of rehabilitation, Joe miraculously recovered and regained his ability to speak and walk short distances.

Although Joe continues to make progress in his recovery, he still relies on his wheelchair because he has to undergo frequent surgeries. Receiving a specially adapted custom Homes For Our Troops home will enable him to access every part of his home in a wheelchair, especially his children’s rooms. He is limited in what he can do in his current living environment because the hallways and doorways are too narrow. Regaining his freedom and independence will enable Joe to host more family gatherings and create a home gym. The financial freedom of a donated home will give him the stability to start a nonprofit that takes Veterans on hunting and fishing trips. He currently volunteers with Texas Hunters for Heroes South Texas, where he goes on hunting trips with other HFOT Veterans. He would also like to start his own catering business.

Joe says receiving an HFOT home is a once-in-a-lifetime opportunity that would not be possible without the generosity of the American people. “For us Veterans, the war we have gone through has never ended, as I am reminded every time I look at my scars. It’s assuring to know that there is still humanity and people who care. Thank you from the bottom of my heart.” 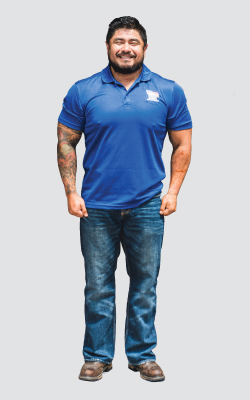