Army Staff Sergeant Joshua Hall was driven by a sense of duty after 9/11 to join the Army. He enlisted shortly after high school, deploying two times to Afghanistan in 2010 and again in 2012.

His military career ended on a hot day in Zharay, Afghanistan, on July 31, 2012. SSG Hall, a Fire Team Leader with 1-508 PIR, was conducting damage assessment with the 4th Brigade Combat Team, 82nd Airborne Division after a firefight when his heel triggered an improvised explosive device (IED). The blast knocked him unconscious and took his left leg. He also sustained severe damage to his right leg, a broken pelvis and a fractured neck and back.

During his flight to Khandahar Airfield, SSG Hall had to be resuscitated three times and received 21 pints of blood through transfusion. He was in a coma the entire time he was treated at Khandahar and Landstuhl, Germany. He awoke at Walter Reed Hospital a week after his arrival there.

Since medically retiring in May 2014, Josh continues to work out every day, trying to improve his fitness and quality of life. He recently became a part-time Krav Maga instructor. However, he still deals with prosthetic issues, and pain along with mobility problems.

Joshua says his HFOT home alleviates his current issues and will help with his future plans and endeavors. He started a company, Last Leg Tactical, which specializes in equipment for individuals with physical limitations. He is in the process of repurposing the company to work with medics in setting up training events, specifically for dealing with blast-related amputations. Joshua is currently working on a fictional book that includes realistic stories about the capabilities and warrior spirit of amputees. He enjoys having enough room in the home and having a peaceful place to relieve stress. Without a mortgage, the worry of providing for his son Liam, is lifted. “It is a tremendous source of pride to own something as significant as a house that allows me to focus on my career and rehabilitation completely,” he says.

Originally from Johnson City, Tenn., Joshua chose to remain in the state to be close to family.

Joshua is appreciative of HFOT’s supporters, who have made his daily life easier. “It warms my heart to know there are still people that truly care about our service men and women.” 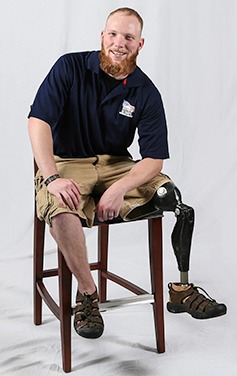