On Nov. 9, 2008, Army Corporal Isaac Jensen, a combat medic on his first military deployment, lost both of his legs and sustained a severe arm injury including irreversible nerve damage to his left arm, when two one-hundred pound bombs detonated within close range in Malalah, Iraq.

While searching an Iraqi home with two other Soldiers, one of them opened the refrigerator door triggering the blast which seriously injured all three Soldiers. CPL Jensen sustained a compound fracture of his wrist, but using one hand, he managed to place tourniquets on the Soldier closest to him and administer morphine. Attempting to stand to search for his other comrade, he realized both of his legs were mangled and unusable so he began dragging himself on his stomach using his uninjured arm to reach his severely injured teammate.

Only after placing tourniquets on the arm and leg of this Soldier, did SPC Jensen treat his own injuries, placing tourniquets on three of his own limbs. Evacuated by Black Hawk helicopter, SPC Jensen arrived in Ballad where he was stabilized for transport to Landstuhl, Germany, and eventually to Walter Reed Army Medical Center where he spent months recovering from his injuries.

In August 2012, he and his wife Bethany received a specially adapted custom home from Homes For Our Troops, which he says has been a life-changing gift. Now medically retired, Isaac enjoys riding roadster vehicles and spending time with his wife Bethany and the couple’s son James. Isaac is also a huge advocate for the Homes For Our Troops mission, and enjoys sharing his journey as an injured Veteran and speaking to supporters about the impact his home has had on helping him rebuild his life. 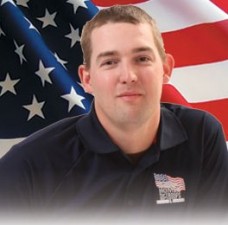