Three months into his first deployment, Army Sergeant Kevin Jaye, an Infantryman with the 1-64 AR 3rd Infantry Division, stepped on a pressure plate improvised explosive device while on dismounted patrol in the Panjway District of Afghanistan on June 24, 2012. The blast resulted in the loss of his right leg and extensive damage to the left leg and ankle.

SGT Jaye spent more than two years at Walter Reed Medical Center where he has undergone more than 30 surgeries. In an attempt to save his left leg, doctors did an ankle fusion, which requires him to wear a brace when walking long distances. However, he hasn’t let the pain stop him from participating in activities. He recently walked in the Army Ten-Miler in Washington D.C. and hopes to make his left leg strong enough to run it in the future.

Since receiving his HFOT home, Kevin has earned his bachelor’s degree in science from Shepherd University and now works full time as an IT specialist for an elementary school. His previous home was “physically and emotionally” draining and hindered him from doing as much as he wanted. His Homes For Our Troops home is adapted to his injuries, alleviating his challenges and giving him more time to focus on his goals. He has already spoken at elementary schools. “My goal is to show people, that with a positive attitude, dedication, and determination, you can achieve the unimaginable. This home allows me to share my story, make sure my family is taken care of and give me the independence I need to be successful and be an asset to my community,” he says.

Originally from Maryland, Kevin and his wife, Lauren, chose to remain in state to be close to family. They have two daughters, Claire and Lucy. Kevin says the home has helped him greatly in being a parent. “I can carry my daughters to bed, whether I’m in my wheelchair or am walking. I can get to them quickly if I need to. I can do everything that all fathers love doing with their children and it is an amazing feeling,” he says.

Kevin says his journey has been filled with great supporters who have given him the drive to do better and never quit. He has nothing but praise for HFOT’s supporters. “Through your generosity, we are able to live independently again. We are able to go out into the world and participate in the community and reach out to others because we are not continuously worried about financial stresses,” he says. “Although your donation is directed toward helping me, I promise that many more people will benefit because of what this home will allow me to accomplish.” 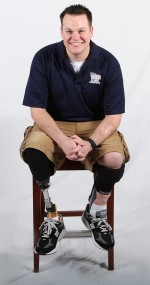