On April 8, 2012, Army Staff Sergeant Alex Jauregui lost both legs and hearing in both ears and sustained extensive injuries to his right hand and forearm when he stepped on an improvised explosive device (IED) in Sangsar, Afghanistan.

SSG Jauregui was on a routine morning patrol in Sangsar, Afghanistan with the 2-508th Parachute Infantry Regiment when his squad detected an IED. While readying four of his Soldiers to escort Explosive Ordnance Disposal (EOD) to the site, SSG Jauregui spotted a secondary wire leading to another IED. After photographing the site and approaching his platoon sergeant and EOD technician to share this new information, SSG stepped on and triggered a third IED.

After the initial blast, SSG Jauregui recalls his vision becoming blurry and his ears ringing while being dragged away by his buddy. The sights and sounds of the momentary chaos were unlike no other experience he had known throughout his 42 months of combat, which up to that point SSG Jauregui had endured unscathed. His soldier instincts told him to sit up and assess his injuries and respond to the situation, but those coming to SSG Jauregui’s aid would push him down and tell him to stay put, reassuring him that he would be okay.

When SSG Jauregui asked those around him how badly he was injured, a fellow soldier gave SSG Jauregui the brutal truth that he would likely lose his legs. With no medic and no morphine to ease the pain of his burning legs, SSG Jauregui found comfort in the familiar voices of brothers coming to his immediate aid, all the while urging him to stay conscious until MEDEVAC arrived. Although he could not keep his eyes open or blink to signal his alertness, SSG Jauregui responded with a thumbs up; moments later he was non communicative. The last thing SSG Jauregui remembers during his transport is hearing a crew member on the MEDEVAC team call to him, “Hang in there Bud, we are five minutes out.”

SSG Jauregui was airlifted to Kandahar, and then treated at Landstuhl, Germany. He was then brought to the United States to Walter Reed Hospital, where he received extensive rehabilitative therapies.

Alex enjoys fishing, hunting, and being active in the outdoors. As he continues to recover, he plans on extending his career with the federal government by possibly working for the DEA, Border Patrol or the TSA. If that is not possible, he says he would like to pursue a degree in orthotics or prosthetics.

Since receiving his specially adapted HFOT home in 2015, Alex has taken up beekeeping and started a business making honey from the hives his rents. 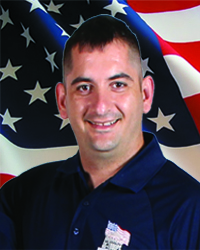