Alexander Hussey joined the Army shortly after high school. After Infantry training and jump school, he served with the 82nd Airborne Division deploying to Afghanistan in early 2012.

Two weeks before his tour was over, on Aug. 7, 2012, Army Specialist Hussey was on patrol with the 508th Parachute Infantry Regiment (4th Brigade) in Kandahar Province in Afghanistan when an improvised explosive device was set off near him. SPC Hussey was immediately knocked unconscious by the blast and does not remember the incident. He lost both legs and left hand and sustained a traumatic brain injury (TBI).

Airlifted to Landstuhl, Germany, SPC Hussey was not expected to live. After two weeks with his family at his bedside – and still unconscious – he was transferred back to the United States. After two months at Walter Reed, he was sent to the Palo Alto VA’s Poly Trauma Center, where he emerged from his coma six months later. Soon after, he transferred to a rehab facility in Southern California. There he regained his ability to comprehend his surroundings, speak clearly, eat and move his body. He currently uses a wheelchair but does equestrian and pool therapy to further his recovery.

Alex married his wife Kim in October 2013 and before receiving their HFOT home, they lived with Alex’s parents. Kim describes her husband as an energetic, happy person who brings smiles and strength to everyone. She says it is amazing to finally have a home fully accessible to Alex. The two enjoy having a kitchen big enough for them to cook together. A lover of the outdoors, Alex is excited about having easy access to the backyard.

Alex chose to build his home in Washington, to be close by to family who are right across the state border in Oregon, where he and Kim grew up.

The home enables Alex to be a part of a community and gives him the foundation to pursue his goals and give back. He is currently volunteering at a cat shelter and has plans to put a barn on his property and get a horse so he can continue his therapy between sessions. Kim now has more time to focus on her future in the new home and is pursuing a degree to become a preschool teacher. Alex would also like to play basketball and eventually coach. 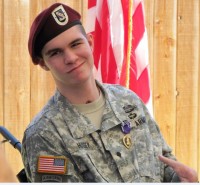