Always having a desire to serve his country, Brandon Huff enlisted in the Army when college did not work out. He joined as an Infantryman, deploying to Iraq with C Company, 1-24th Infantry, 1st Brigade, 25th Infantry Division in 2004.

On April 20, 2005, Sergeant Huff was leading a three man team to secure a suspected car bomb in Mosul, Iraq, when an improvised explosive device (IED) was triggered nearby. The blast resulted in the loss of his left leg, a traumatic brain injury (TBI), and extensive abdominal injuries.

During his recovery, Brandon started kayaking with Team River Runner, a nonprofit that teaches paddle sports to injured Veterans. He eventually began volunteering with them and is now part of their national staff. Brandon would like to kayak more often, but much of his energy goes into maneuvering around his non-adapted home. In a specially adapted custom Homes For Our Troops home with wider doorways and hallways, Brandon will be able to use his wheelchair more often and not use his prosthetic as much, which causes his leg to become sore and painful at the end of the day.

Most importantly, the new home will provide a safe and secure environment for Brandon and his wife Netta to start and raise a family. “I have the goal to be the kind of father who is very involved with his children and all their activities. Having an adapted home will help me conserve the physical, mental, and emotional energy to better fulfill this,” he says. “I also want to teach them that they can overcome any obstacle they may face.”

Originally from California, Brandon is choosing to build his home in Maryland where he lives now because of the support network he has formed.
Since he has never lived in accessible housing since being injured, Brandon can only imagine what it will be like to live in a barrier-free environment. “This home is going to be the American Dream for us,” he says. 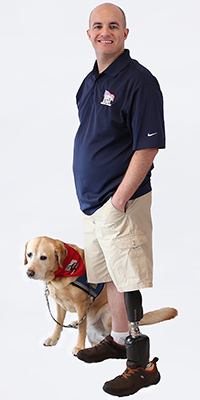