Marine Corporal Joshua Hotaling was on his first deployment when he lost both legs and sustained severe hand injuries in an improvised explosive device (IED) blast in Sangin, Afghanistan on May 13, 2011.

The Mine Sweeper of 1st Battalion, 5th Marines, Cpl Hotaling was sent to clear a compound in order to secure a place for his Marines to sleep that night. Immediate aid was rendered by his team who worked to save his life and prepare him for medical transport. Never losing consciousness, Cpl Hotaling remembers the sights and sounds that surrounded his evacuation including being carried on a litter past Afghan villagers who witnessed the events.

Transported to Bagram Air Force Base, Cpl Hotaling was rushed into surgery to try to stop his blood loss and repair the artery in his right wrist. Unfortunately, the surgery was not successful, necessitating the eventual amputation of his thumb and part of his index finger. Next airlifted to Landstuhl, Germany, Joshua arrived two days after the blast to see his mother standing at his bedside.

Knowing then that he was seriously injured and unable to speak while connected to a respirator Joshua pointed to letters on a board to spell out a message asking if any of his buddies had been hurt as well. He was relieved to learn that he was the only one injured that day.

Arriving at Bethesda after spending two days in Germany, he would remain there for two and a half months enduring surgeries and therapies before being transferred to Balboa Naval Medical Center in San Diego where he continued to receive treatment until his retirement in February 2013.

Cpl Hotaling is pleased to be back home in Northern California near his family and friends. Josh and his twin brother, Troy, both enlisted in the United States Marine Corps after high school. A family of patriots, the Hotalings have been a constant source of support for Josh throughout his recovery. Josh is involved with his local church and enjoys spending time outdoors. Handcycling, fishing, hunting, off-roading, and especially surfing and SCUBA diving are his favorite activities. Since moving into his HFOT home, Joshua has married his wife Jenny. The couple became parents to a baby girl in 2017 and a baby boy in 2018.

Cpl Hotaling would like to thank all of the donors and volunteers who support Homes For Our Troops. “Since joining the Marines in April 2006, I have been taught to be self-sufficient, adapt and modify, and to be faithful to my country, family, and brotherhood. Since being injured, support groups such as HFOT allow me to continue moving forward instead of looking back. Your help to provide housing that lets me be independent again means more to me than you will ever know. Thank you.” 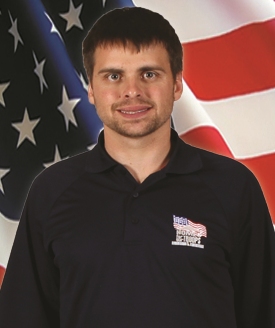