Kevin Honaker joined the Marines shortly after high school, inspired by several family members who also served. He enlisted as an engineer with the 4th Combat Engineer Battalion, and went on his first deployment to Afghanistan in the summer of 2011.

On Sept. 13, 2011, LCpl Honaker was on patrol supporting the 1st Battalion, 6th Marines, in Sangin, Afghanistan, when he stepped on an improvised explosive device (IED). The blast resulted in the loss of both his legs.

Once transferred back to the United States, Kevin underwent 12 surgeries during his one-year stay at Walter Reed Medical Center.

Now medically retired, Kevin has made an impressive recovery. Since being injured, he has obtained a degree in agricultural business from Tennessee Tech and completed electrician school. He runs his own company, which provides lighting for films. Despite the progress Kevin has made, he still experienced daily challenges. His previous home was too small to fit his wheelchair, so he had to wear his prosthetics all day causing him much discomfort, especially after working long hours on movie sets. Additionally, he could not adequately access the bathroom, making showering difficult. A specially adapted custom Homes For Our Troops home with wide hallways and doorways and a roll-in shower mitigates these concerns for Kevin.

Regaining his freedom and independence in an HFOT home, Kevin says he has more time to dedicate to his business. The home also enables Kevin to focus on his other interests which are hunting, golfing, and working out.

Kevin says words could never express how thankful he is toward HFOT’s donors and sponsors who contributed to the building of his home. “I will be forever grateful to everyone who helped me along the way,” he says. 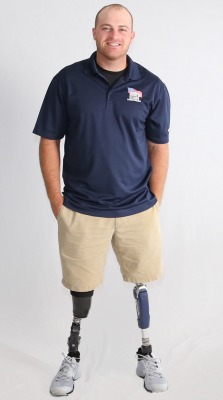