Marine First Sergeant Ben Holmes joined the Marines right out of high school in 1995. He deployed six times, three being combat tours – twice to Iraq and one to Afghanistan. He sustained nerve damage in his right arm when wounded on his second deployment to Iraq on April 1, 2004.

1stSgt Holmes deployed to Afghanistan in 2010 with the 3rd Light Armored Reconnaissance Battalion. On April 20, 2011, the vehicle he was commanding struck an improvised explosive device (IED) in Bahram-Cha, Afghanistan. The blast shattered his right ankle and broke the left side of his pelvis. After undergoing numerous surgeries to repair his leg, doctors eventually elected to perform an amputation one year following his injury.

Now medically retired, Ben is a substitute teacher and a doctoral candidate at the City University of Seattle. When he is not in the classroom or conducting research, he enjoys spending time with his wife, Diana, and their three children.

At the end of the day, Ben typically transitions from his prosthetic to a wheelchair. Having an accessible bathroom and kitchen in a Homes For Our Troops home limits how often he has to transfer from his wheelchair, mitigating the risk of falling. Living in a safe, barrier-free environment enables Ben to focus on his studies and gives him more time for family and coaching youth sports.

Originally from Texas, Ben chose to build his home in California for the warm climate and to be close to family and the VA.

Ben is grateful to have received a specially adapted home and promises to give back to the American people. “I am determined to repay the kindness and generosity my family has received by making a positive impact on the lives of others,” he says. 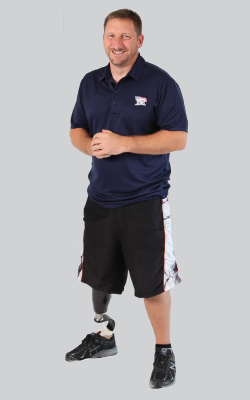