Juan Carlos Hernandez enlisted in the Army right after high school with a strong desire to serve his country. Having immigrated to the United States from Mexico at the age of eight, Juan felt the need to serve the country that gave so much to him. The Army provided many opportunities for him and helped expedite his path to U.S. citizenship. He became an American citizen while on his first deployment to Afghanistan in May 2009.

On Oct. 13, 2009, Sergeant Hernandez was conducting a nighttime aerial operation as a door-gunner with Task Force Palehorse, 7/17th Cav, 159th Combat Aviation Brigade, 101st Airborne Division, when the Chinook helicopter he was flying in was shot down by a rocket-propelled grenade (RPG). SGT Hernandez was the only one injured during the incident, sustaining severe damage to his right leg. He was medevaced to Bagram Air Base, where surgeons amputated his right leg.

Once back in the United States, Juan moved quickly through his rehabilitation. By late December, he received his first prosthetic. Through the Center for the Intrepid, Juan was able to get involved with adaptive sports, including sled hockey, wheelchair basketball, hand-cycling, and eventually upright cycling. “It was with the help and encouragement from my family, friends, and therapist that I was able to get into the right mindset and not let my injuries keep me from moving forward and living a life filled with adventures and achievements,” he says.

Now, over ten years since Juan was injured, he is grateful he can still do many activities he enjoys. In addition to his athletic endeavors, he loves gardening and camping with his fiancée Margaret Mullen. The couple now has a Golden Doodle puppy. He is close to finishing his master’s degree in occupational therapy at Loma Linda University and hopes to work in the Veteran Healthcare System. Juan also volunteers within his community and continues to grow as a person, striving to reach his fullest potential.

As active and ambitious as Juan is now, he has yet to find a home adapted to his injuries. He often becomes discouraged that he must use crutches to get around and hop on one leg to get in the shower since his current home is not wheelchair accessible. Juan constantly fears he will fall and injure himself further. Receiving a specially adapted custom home will mitigate many of these issues for Juan. “Having a home with adaptations will enable me to age in place and make me feel like I can rest peacefully at home without worrying about injuring myself,” he says.

Additionally, living in a barrier-free environment will enable Juan to concentrate on advancing his career instead of focusing on the obstacles within his home. He will also have more time and energy to dedicate to his volunteering and community involvement. “Receiving this home will enable us to pay it forward to other Veterans who are also in need of specially adapted homes, whether it is volunteering with the organization or becoming a peer mentor for other Veterans in the program,” Juan says.

Juan wants HFOT donors and supporters to know that without their support, this organization could not continue. “Your generosity is what keeps programs like this alive and able to continue changing the lives of severely injured Veterans,” he says. “Thank you for helping Veterans such as myself live a life as independently as possible while graciously aging in place.” 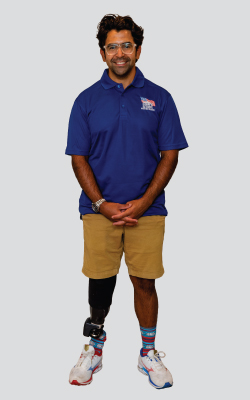