Marcus Hayward joined the military after realizing college wasn’t the right fit for him, and it ended up being one of the best decisions of his life. He enlisted as a specialized search dog handler with the 385th Military Police Battalion.

On July 29, 2010, during his third combat deployment, Sergeant Hayward was supporting the 3rd Special Forces Group in Khakrez, Afghanistan, when his ATV struck a pressure plate improvised explosive device (IED). SGT Hayward lost his left leg and sustained damage to his eye, face, and left hand.

Marcus spent the following two years undergoing rehabilitation and regaining the ability to walk on his prosthetic.

Medically retired, Marcus has since earned his associate’s degree in physical therapy and now has two children, Macayle and Mekhi, with his wife Elizabeth. A self-described fitness enthusiast, Marcus has found a passion for adapted sports and competes frequently. He works in the substance abuse recovery community, helping individuals find freedom from drugs and alcohol through movement.

Marcus may have an active lifestyle, but his current living environment still presents many challenges. Since his home is two stories, Marcus experiences difficulty using the stairs, and risks further injury hopping on his remaining limb to get around when his prosthetic is off. Receiving a single-level, specially adapted custom Homes For Our Troops home will not only give Marcus more freedom, but it will also relieve much stress for Elizabeth who often worries about Marcus’ safety when she is not home.

Regaining his independence within the home will give Marcus more time and energy for his future plans. He wants to help Elizabeth grow her nail salon business and, most of all, Marcus is looking forward to making memories and sharing experiences with his family in and outside the home.

Marcus says being welcomed into the HFOT family feels like he “hit the jackpot”. “You are changing the lives of not only the Veterans, but their families as well. Your support leaves each Veteran and family feeling cared for and seen.” 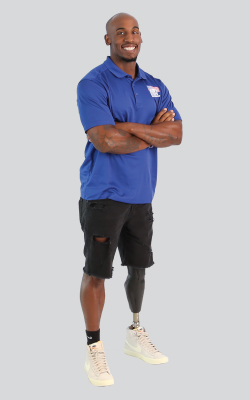