On Dec. 28, 2010, Marine Master Sergeant John Hayes was on his fourth deployment when he lost both of his legs and sustained life-threatening injuries after stepping on an improvised explosive device (IED) in Sangin, Afghanistan. An Explosive Ordnance Disposal Technician, MSgt Hayes was on a routine mission, when his comrade located an undetonated device.

While retracing his steps to return and assist his partner, MSgt Hayes stepped on a buried IED resulting in the traumatic amputations of both of his legs. During transport out of Afghanistan to Landstuhl, Germany, MSgt Hayes required lifesaving resuscitation multiple times. Once stabilized, he was brought to Bethesda National Naval Medical Center where the long road to recovery began.

During his first week in the hospital, Hayes endured a series of grueling surgeries before a serious infection led to a rare hemi-pelvectomy amputation, leaving Hayes without a leg or pelvis on his left side. MSgt Hayes has since had more than 60 surgeries.

John loves the outdoors and enjoys hunting and fishing. He likes to rebuild old cars, but mostly enjoys spending time with his wife Janel, three young daughters, and son. He is happy to be a stay at home dad while also going to school to earn a degree in business management. Since receiving his home, John has become a shooting instructor.

John appreciates all of the support from HFOT’s donors and volunteers who made his specially adapted home a reality. The home enables him to live his life without barriers. He is grateful for the opportunity to be the dad he always hoped to be without the worry of how to provide a safe home for his family. “Despite the daily challenges that I must face, I know that my home will not be an obstacle in my recovery. Thank you for ensuring my family’s livelihood by providing us with this gift.” 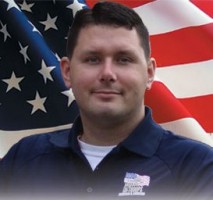