In June 2008, Army Sergeant Kenneth Harker was on his second deployment with the 2-30th Infantry, 4th Brigade, 10th Mountain Division, when he lost both of his legs in Baghdad, Iraq, when an explosively formed penetrator (EFP) tore through his vehicle.

Too dark to see what was going on, initially SGT Harker felt as though he was floating before he became aware of what had happened. Checking himself for injuries, he came to the realization that his left leg had been traumatically amputated and his right leg was severely injured. Lifesaving measures by his teammates readied him for evacuation, placing tourniquets on both of his legs and transporting him in a vehicle for the one mile trip to Forward Operating Base (FOB) Loyalty before being transported to FOB Liberty in the Green Zone.

Airlifted to Landstuhl, Germany, Ken was then evacuated to Walter Reed Army Medical Center where he endured countless surgeries, treatments, and physical therapies for more than three years. Transferring to Bethesda Naval Medical Center, Ken remained there until he was medically discharged and returned home to Indiana in the fall of 2011.

SGT Harker enjoys archery, wheelchair basketball, shooting, and hunting and is active in Paralympic sports and camps. He also enjoys four-wheeling. When Ken is not hunting or fishing, he is busy being a full-time father to his four young children.

“Having a home adapted for me gives me more motivation and confidence to complete my goals and be more comfortable doing so… Thank you for meeting my needs and the needs of my family,” he says. 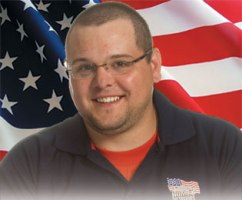