While on foot patrol as an Infantryman with 3rd Battalion, 2nd Marines in Helmand Province, Afghanistan, Corporal Kevin Hanrahan stepped on an improvised explosive device (IED) on June 24, 2011. The blast resulted in the loss of his left leg and the entire back of his right thigh. He also sustained a traumatic brain injury (TBI).

Though Kevin wears a prosthetic, the device makes his leg sore and painful. He previously lived in a tri-level home with his wife Whitney and their two children, which made walking up and down the stairs painful. He says his specially adapted custom Homes For Our Troops home with open doorways and wide floor plan allows him to spend more time in his wheelchair around the home, relieving much of his discomfort. The roll-in shower makes a huge difference in his daily living. He used to depend on Whitney to get him in and out of the shower.

Originally from Illinois, Kevin chose to live in Wisconsin to be close to family. With a mortgage-free home, Kevin is able to focus on his goals. He is currently studying alternative medicine. He plans to earn his bachelor’s degree and work as a consultant in the alternative medicine field. With the ten acres his now owns, his longterm plans are to help Veterans and provide a place where they can hunt, shoot, and relax.

Kevin and Whitney are grateful to all HFOT supporters for contributing to their new home. “A specially adapted home is one of the most important things a wounded warrior needs to help them be more independent in their lives,” he says. “Having to depend on your family members for everything is hard on everyone. The fact that people care so much means the world to us.” 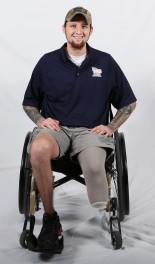