After watching both his parents serve in the Army, Christopher Hancock felt destined to lead the same lifestyle. Motivated by the Sept. 11 terrorist attacks, Christopher enlisted in the Marines as a combat engineer not long after high school in 2005. He loved experiencing foreign cultures while traveling to different countries including Japan, China, and the U.S. territory of Guam. He first deployed to Afghanistan in 2009.

On June 26, 2011, during his second deployment, Marine Sergeant Hancock was on a patrol with the 2nd Combat Engineer Battalion in Sangin Valley, Afghanistan, when he knelt down on an improvised explosive device (IED). The blast resulted in the loss of both his legs.

Now medically retired, Christopher says his son, Matthew, is his motivation and strength for everything he does. His specially adapted custom Homes For Our Troops home with an open floorplan gives Christopher extra space to do activities with his son, like painting and drawing. Christopher says he could not fully relax in his previous home because there was not enough space for his wheelchair. Additionally, preparing meals for his son is now easier in a kitchen with lower countertops and accessible appliances.

Christopher says the “possibilities are endless” now that he’s regained his freedom and independence in an HFOT home. He is hoping to return to school.

Originally from Tennessee, Christopher chose to build his home in North Carolina for the support network he has built in the area.

He is grateful to HFOT’s donors and supporters who contributed to the building of his home. “This home enables me to reach a level where I can find peace,” he says. 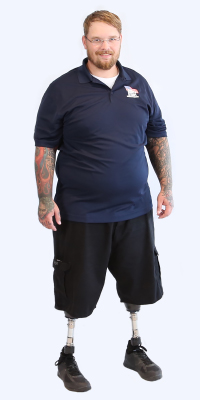