After the September 11 attacks, Quentin Hamilton felt called to serve and defend the country he loves. He enlisted in the Marines following his high school graduation as a mortarman with the 2nd Battalion, 4th Marines, and loved the brotherhood and pride he felt being a Marine. He went on his first tour in 2007 to Iraq, and deployed twice to Afghanistan in 2010 and 2011. He also went on two humanitarian deployments with the 11th Marine Expeditionary Unit (MEU) to Okinawa in 2008 and Burma in 2009.

On Jan. 31, 2012, during his third combat deployment, Sgt Hamilton sustained severe damage to his left leg and other injuries when he stepped on an improvised explosive device (IED) in the NowZad District in Afghanistan. After years of dealing with intense pain, Quentin made the difficult decision to have doctors amputate his left leg.

Now medically retired, Quentin and his fiancée, Stefanie Clemons, are busy raising their young daughter, Abigail, and son, Gunner. A lover of the outdoors, Quentin enjoys hiking, biking, and swimming, but his current living environment prevents him from enjoying these activities since he cannot rest and recover comfortably at home. He often gets frustrated that he cannot use his wheelchair because the doorways are too narrow and using crutches often becomes painful. “This home will enable me to be more adventurous like I once was, knowing I have a safe and secure home to go back to where I will be able to relax and recoup at night,” he says.

The freedom and independence Quentin will regain in the new home will motivate him to further his education and career. He and Stefanie would like to open their own RV storage business, and expand their hobby of making American flags out of reclaimed wood. Most importantly, Quentin will be able to help Stefanie more in caring for their children and around the home.

Originally from Iowa, Quentin is choosing to build his home in Texas.

Quentin and Stefanie say their HFOT home is a dream come true and they appreciate the generosity of HFOT’s donors and supporters. “Your support is doing amazing things for my fellow wounded countrymen. You are opening up these Veterans’ lives and getting them back out and doing what they love,” says Quentin. 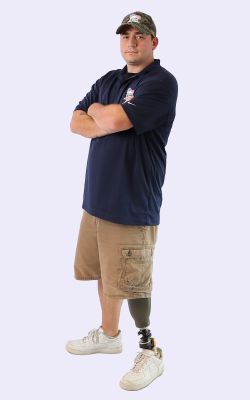