Marine Corporal Jason Hallett was one month into his first deployment when he sustained the traumatic amputation of both legs and his right arm, and extensive injuries to his left hand when he stepped on an improvised explosive device (IED) in Sangin, Afghanistan on Oct. 23, 2010.

While clearing a compound as part of the 3rd Battalion, 5th Marines, Cpl Hallett and his squad had cleared three IED’s from the area when a fourth IED was detonated by a single step. Thrown through the air, Cpl Hallett was dug out of the rubble by his teammates who immediately began treating his severe injuries.

Under heavy fire from insurgents, Cpl Hallett was carried across an open field to the back of a small pick-up truck which transported him across the Helmand River to the closest Forward Operating Base (FOB). Lifesaving measures prepared Jason for the medical evacuation by helicopter while the firefight escalated…it would continue for several hours. Initially treated at Camp Bastion, he was stabilized for transport to Landstuhl, Germany. Arriving stateside, Cpl Hallett was treated at Bethesda Naval Medical Center before being transferred to Balboa Naval Medical Center.

Jason enjoys music, all sports, and spending time with his friends. A native of Colorado, Jason, and his wife, Rachel, are excited to be living in Windsor and raise their family there. They became parents to twins, Jason Jr., and Marina in October 2016. Jason is currently studying finance at Colorado State University and is a financial advisor.

Jason appreciates the support from the public and says knowing that he has people encouraging him during his journey has helped make his reintegration into civilian life easier. “Receiving this home from Homes For Our Troops provides me a safe, accessible place to live, a place to raise my family. Knowing that I won’t have to worry about where I will live in the future is a huge worry taken off of me. Thank you,” he says. 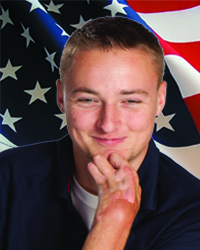