On April 21, 2011, while clearing a compound, Marine Corporal Mark Haegele lost both legs and sustained hearing loss and injuries to both arms when he stepped on an improvised explosive device (IED) in Mehraj, Afghanistan. Cpl Haegele was stationed as a 2nd CEB combat engineer attached to Scout Snipers, 3rd Battalion, 2 Marines, and was only two months into his first deployment.

Cpl Haegele recalls thinking that something was very wrong on the day he and his unit approached a compound where they had planned to hide. Upon further investigation, Cpl Haegele noticed the roof had disturbed earth and deemed the area unsafe. Sweeping the roof with his metal detector, he found an IED and warned the other team members to steer clear, continuing on toward the ground level. A continued search of the area also led to a hit on his detector; eventually, he stood up and proceeded cautiously to a red door.

He recalls taking a few steps and then everything going black and his lungs filling up with air. At that point, Cpl Haegele experienced an ear-piercing ringing in both of his ears, the feeling of being lit on fire and seeing blood gushing out of his left leg. His buddies began calling to him; Cpl Haegele at the time was hoping to die just to stop the pain. Seconds later his teammates were at his aid, Cpl Haegele fading in and out of consciousness during the triage. Cpl Haegele’s team leader eventually managed to connect with Air Force Para Jumpers (PJ’s), whose helicopter could not land because the landing zone was too dangerous. A PJ rappelled down and hoisted Cpl Haegele to the bird. Cpl Haegele screamed his name as loud as he could, drifted to sleep and did not wake up again until he was in the United States two days later.

Now medically retired and living in his specially adapted Homes For Our Troops home, Mark is grateful to have counters and cupboards all within reach. He is especially thankful for the accessible garage, as he no longer has to go outside to a steep decline, especially in winter, to get to his vehicle.

Mark is continuing working as a meat cutter and is now able to help his wife, Kari, with cleaning and household chores and help care for their son and daughter.

Mark is grateful to all who supported his project. He says, “Everyone thanks us wounded Veterans for our service, but I want to thank all of the supporters for making organizations like Homes for Our Troops what they are today. They give us hope for our future.” 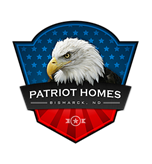