Following the footsteps of several family members, David Guzman joined the Army with a sense of pride and honor in 1989. He was stationed in Fort Hood, Texas, before transitioning to the Texas Army Reserve for a decade. Motivated to make a difference by the Sept. 11, 2001, terrorist attacks, David opted to become active duty again in 2002, joining the 593rd Support Group at Fort Lewis, Wash., as a truck driver and light vehicle mechanic.

On Sept. 17, 2004, Sergeant Guzman was on his first combat deployment when his vehicle was struck by an improvised explosive device (IED) in Taji, Iraq. SGT Guzman sustained shrapnel injuries, hearing loss in his right ear, loss of use of his right foot, and other injuries.

David was treated in country immediately following the blast and was able to return to his unit a few days later. He continued to serve until he contracted gangrene in his right lower leg several weeks later, and was medically evacuated later that month. He was treated at his home base in Fort Lewis before being medically discharged in October 2005. After leaving the military, he spent a couple years doing therapy and learning how to walk with a leg brace at his local VA. He still uses the brace and hearing aids today, and receives ongoing treatment for his injuries.

During his recovery, David developed a passion for cooking and obtained degrees in culinary arts and agricultural science. Now a professional chef, David pays it forward by preparing dishes and meals for fellow Purple Heart recipients and his family. Helping others and cooking, he says, is therapeutic and gives him a purpose. However, as a seasoned and skilled cook, David found it especially discouraging that the kitchen in his previous home was not accessible. He prefers to use his leg rest bench that he kneels on while preparing meals, but he did not have enough space to use it in his former home.

Having a specially adapted custom home not only helps David in the kitchen, it also provides comfort for his wife Maribel and their three children. Maribel used to constantly fear her husband would fall and injure himself further in the shower, as he has done in the past. The financial freedom of a donated home will also help him achieve his goal of helping his sons open their own catering or smokehouse business.

Originally from Texas, David chose to remain in state and build his HFOT home in the Hays County area for easy accessibility to the surrounding areas and tranquil views. 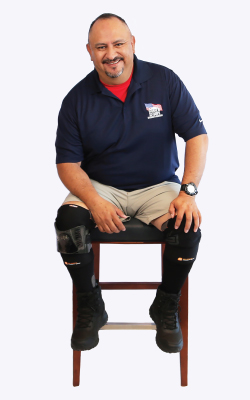