Edward Guldin joined the Army immediately after high school, enlisting as an Infantryman. After training at Fort Benning, he was assigned to the 2-87 Infantry at Fort Drum, N.Y. During his year training for deployment, he met his wife Amanda, and they married shortly before he deployed.

On June 12, 2011, during his first deployment, then Army Specialist Guldin lost both legs above the knees after stepping on an improvised explosive device (IED) while on a foot patrol in Zharay, Afghanistan.

On the first day of a three-day foot patrol, SPC Guldin was climbing over a wall in an area that had been previously cleared when his foot triggered an IED. The force of the blast threw him through the air, causing the traumatic amputations of both of his legs and severe damage to his right hand and arm.

Transported by helicopter to Bagram Air Base, SPC Guldin was stabilized in-country and airlifted to Landstuhl, Germany. He then arrived at Walter Reed National Military Medical Center in Bethesda, Maryland where he remained for nine months, receiving treatments and therapies. SPC Guldin was transferred to Fort Drum as part of the Warriors in Transition Unit.

Now medically retired, Ed enjoys spending time with Amanda and their four children. He also enjoys hunting, fishing, riding his ATV…anything in the great outdoors. He likes to shoot at the gun range and hopes to one day return to school and study gunsmithing.

Edward and his family received their specially adapted Homes For Our Troops home in New York on Nov. 19, 2016. “Thank you for all that you have done for me and my family. This home gives me my freedom and my independence back…I do not have to ask my wife for help with everything and I am able to once again provide for my family. This home benefits all of us…not just me,” says Ed. 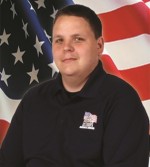