Oscar Guerra joined the Army in 1998 with a desire to travel and see the world. He immediately fell in love with the military. The climate and brotherhood of serving was like nothing he’d ever experienced.

On Aug. 2, 2007, Staff Sergeant Guerra was on his second deployment serving as an Infantryman with the 2nd Battalion, 3rd Infantry Regiment, 2nd Infantry Division, when his vehicle drove over an improvised explosive device (IED) near the Baghdad International Airport (BIAP). The subsequent blast killed several of SSG Guerra’s teammates and injured eight others, including fellow Homes For Our Troops Veterans Adam Putt and Michael Gower.

The explosion caused severe injuries to SSG Guerra’s left leg, and doctors immediately amputated it at a Baghdad hospital after his medical evacuation. Once he returned to the United States, he continued surgeries and rehabilitation at Brooke Army Medical Center in San Antonio. At first, Oscar had a difficult time during his recovery. However, he soon found inspiration from others he rehabbed with, and his outlook improved with each new milestone he reached.

Now medically retired, Oscar’s main priority is his three sons and wife Felicia. He says it is especially important to him to raise his sons as good, productive men. He enjoys inspiring and influencing young people and hopes to become involved in community based activities as a mentor, like the Boy Scouts of America and Junior ROTC.

Oscar wants to continue giving back to others, but his previous living environment prevented him from pursuing many of his aspirations. It was frustrating for Oscar that Felicia took on much of the outdoor home maintenance because their home was on a hill and difficult for Oscar to navigate on his prosthetics. His bathroom was not wheelchair accessible, so Oscar was forced to hop on his remaining limb when transferring into the shower, risking further injury. It was especially discouraging for him to rely on his family for help around the home because his wheelchair did not fit in many of the rooms and hallways. He says his specially adapted custom HFOT home mitigates many of his current obstacles and empowers him to pursue his future endeavors. He would like to continue his education and start his own nonprofit. “Giving back is my new mission,” he says.

Originally from Los Angeles, Oscar chose to build his home in Texas for the area’s climate and culture.

Oscar wants HFOT donors to know his home will not only benefit himself, but his family as a whole. “The home restarts our life and keeps us worry-free, and creates the environment we can only dreamed about before,” he says. 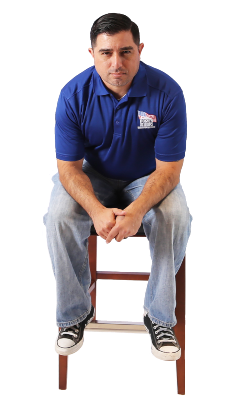