During his service, Sergeant First Class Green deployed to Afghanistan four times and did two other deployments supporting the Global War on Terror in which he sustained severe damage to his right leg during combat operations while in Afghanistan. After years of trying to salvage the leg, doctors amputated his leg in 2015.

Now medically retired, Jake and his wife Kelly are busy raising their three sons, Marc, Ethan, and Aaron. Jake is the East Chapter Chairman for Operation Open Water, works for Anotiva as a program manager, and is also a partner at a supplement company. After a long day at work, he is usually in pain from wearing his prosthetic all day. He would prefer to use his wheelchair to recover. Receiving a specially adapted custom home will give Jake a safe environment in which to recuperate, giving him more time for family and giving back to the community. Kelly recognizes that Jake’s injuries will progress as he ages and is grateful he will soon be living in a barrier-free home.

Once they move in, Jake and Kelly say they are committed to paying it forward. The financial freedom of living mortgage-free will enable them to give back to nonprofit organizations.

Originally from California, Jacob is choosing to build his home in North Carolina because he was stationed and continues to work at Fort Bragg and finds the area to be a supportive and safe community.

Jake says he has a hard time finding the right words to express his gratitude for HFOT’s donors and supporters. “We do not feel worthy of such an exuberant gift and we are honored to be part of such an amazing country and community that is beyond generous,” he says. 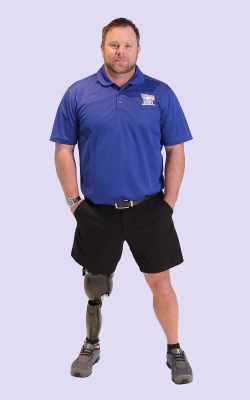