In February 2007, Marine Sergeant Kenneth “Dylan” Gray was on his third deployment when he lost both legs after driving over an anti-tank mine in Al Qaim, Iraq. Waking up in the hospital in Germany, Sgt Gray had no recollection of the blast that tore through his HMMWV; his legs being blown off upon impact. He was quickly medevaced to a hospital in Al Asad and then to Landstuhl, Germany, and spent the next few months at the National Naval Medical Center in Bethesda, MD.

Sgt Gray is now living in his Homes For Our Troops specially adapted custom home where he can use his wheelchair without worrying about not being able to access all areas independently. He says that knowing that so many Americans are willing to support our injured Veterans as they begin the next chapters in their lives is “one of the reasons to get up and push-on every day. Thank you!” 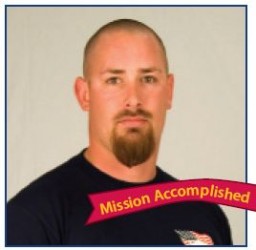