On June 3, 2008, Army Staff Sergeant Earl Granville was on his third deployment serving as an Infantryman when a roadside bomb left him with severe leg injuries in Zormat, Afghanistan. While returning to the Forward Operating Base after a mission, SSG Granville, the gunner of the vehicle at the time, was thrown from the vehicle when a roadside bomb exploded, killing two of the other passengers.

Landing unconscious in a ditch, SSG Granville awoke to find the team medic working to stabilize him for transport to a Combat Support Hospital. Later transferred to Bagram for surgery, SSG Granville was eventually sent to Landstuhl, Germany where his left leg was amputated.

Arriving at Walter Reed Army Medical Center in mid-June, he spent nearly two months as an in-patient before being released for therapies and treatments. Additional surgery was performed on SSG Granville’s right foot 18 months after his initial injuries, requiring additional time spent at Walter Reed.

Earl enjoys spending time with his young daughter Alexandria. He is a member of the USA Warriors Sled Hockey Team and enjoys participating in many adaptive sports. He is currently running for U.S. Representative of Pennslyvania’s 8th Congressional District. Earl is grateful to be living in a specially adapted home that will help him focus on his recovery and his future.

When asked what he would like to say to those who helped make his Homes For Our Troops home a reality, Earl shared the following: “A specially adapted home helps me by making my day to day living so much easier and gives more of my independence back. Thank you for your time and effort, and for helping our wounded Veterans and giving them so much.” 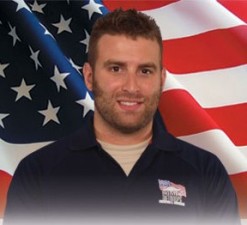