Michael Gower was admittedly a “wild child” in his youth, and enlisted in the Army to find direction and discipline in his life. He deployed twice as an Infantryman out of Fort Lewis to Iraq during Operation Iraqi Freedom, 2003-2004 and 2006-2007.

On Aug. 2, 2007, while serving in Baghdad on his second deployment with A Company, 2nd Battalion, 3rd Infantry, 3rd Stryker Brigade, 2nd Infantry Division, the vehicle transporting Army SGT Gower rolled over a two-ton, subsurface improvised explosive device (IED). The subsequent blast killed several of SGT Gower’s teammates, and injured eight others, including fellow HFOT Veterans Adam Putt and Oscar Guerra. SGT Gower was pinned in the vehicle, critically injuring his back and fracturing both his feet, tibia and fibula. He also sustained a severe traumatic brain injury (TBI).

Medically retired in January 2009, Michael underwent numerous limb salvage surgeries over the years to aid in his recovery. Currently, he is only ambulatory for short distances, and doctors have not ruled out amputating both legs in the future. His specially adapted home from Homes For Our Troops provides him and his wife Kelli with a sense of security, enabling Michael to have full wheelchair access and independence. He previous home was on a hill with a steep driveway, which made it challenging for Michael to enter and exit his home. His HFOT home mitigates this issue. “This new home improves my quality of life because I am able to get in and out of my house,” says Michael. “It also makes my wife and son’s lives better since they don’t have to watch me struggle.”

In his free time, Michael enjoys spending time with Kelli and their son Alexander. He also enjoys hunting, fishing, woodworking and tinkering with small mechanical projects. Living in a mortgage-free home affords him the time to spend time on his hobbies, and equips him with the space he needs for his tools and projects. Most importantly, the home enables him to become financially stable and focus on being a dad.

Michael is already working to pay it forward by assisting several Veteran support organizations in his community. He is an active member in his VFW post, and is actively engaged with the Dorr American Legion, Operation Injured Soldiers, and Buddy to Buddy Program. He and Kelli are happy to be living in their home in Middleville close to family. They extend their gratitude to HFOT’s supporters for providing them with the life-changing gift of a new forever home and Michael is eager to pay it forward for HFOT. 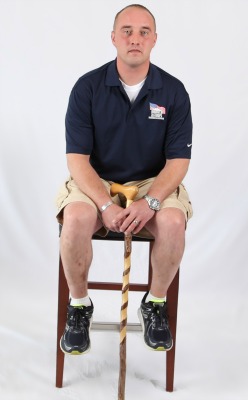