Marine Sergeant Gabriel Martinez was on his second deployment when he lost both of his legs after stepping on an improvised explosive device (IED) in the Helmand Province in Afghanistan on Thanksgiving Day, Nov. 26, 2010.

While conducting a route clearance mission, a vehicle in the convoy hit an IED. Sgt Martinez and his team immediately began a foot patrol in search of any enemy in the area. As he approached the side of the disabled vehicle, Sgt Martinez stepped on a second IED, causing the traumatic amputations of both of his legs.

During the next moments, a third IED detonated, seriously injuring another Marine who was trying to assist Sgt Martinez. Airlifted to a local military hospital, Gabriel was next transported to Landstuhl, Germany before making his way to Bethesda National Medical Center in Maryland, and eventually Balboa Naval Medical Center in San Diego.

Now medically retired, Gabriel and his wife Kayla have two daughters, Madelynn and Macie, and a son, Pearson. Gabriel enjoys outdoor recreation and many sports including hand-cycling and biking. He also participates in marathons and triathlons. Gabe currently works for Homeland Security Investigations.

Sgt Martinez would like to thank all of the donors and volunteers who made his specially adapted home from Homes For Our Troops a reality. “Having a specially adapted home lifts the burden of worry and discomfort by bringing safety and convenience to my daily life and helps me feel at home. The support and hard work of so many people so generously offering their time and donations is a comfort and a blessing, letting us know that others truly care.“ 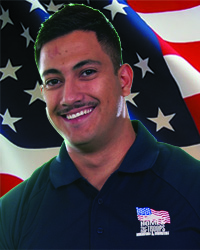