On Oct. 28, 2010, Marine Captain Patrick “PJ” Glavey was one and a half months into his first deployment when he lost both of his legs in an improvised explosive device (IED) blast in Helmand Province, Afghanistan. While working on a routine clearing operation with an Explosive Ordnance Disposal Team and members of the 2nd Battalion, 1st Marines, Cpt Glavey stepped on an IED resulting in the traumatic amputations of his right leg above the knee, his left leg below the knee, and one of his fingers.

Medically evacuated by helicopter, Cpt Glavey was treated at the field hospital at Camp Dwyer before being transported to Landstuhl, Germany. PJ arrived at Bethesda Naval Medical Center within days of his injuries and remained there for nearly eight months enduring more than a dozen surgeries before being transferred to Balboa Naval Medical Center for treatments and therapy.

PJ spends much of his time involved with numerous Veterans’ programs. He enjoys mono-skiing, swimming, and writing. He plans to further his education in order to better provide for his wife, Brynn, and their daughter Gracie.

PJ is overwhelmed by the kindness, generosity, and selflessness of the American people who have helped him and his family during his recovery. “Thanks to Homes For Our Troops, I have the opportunity to live alongside my family…assisting them in daily life rather than being a burden. This is such an amazing opportunity given the terrible incident that occurred to me. Thank you so much, I am eternally grateful.” 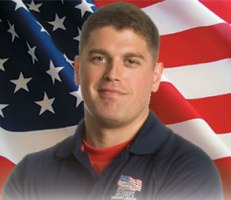