On May 30, 2012, while conducting a dismounted patrol on a route clearance mission with the  3rd Brigade, 2nd Infantry Division in Kandahar Province, Afghanistan, Army Staff Sergeant Jason Gibson, a combat engineer, stepped on a hidden improvised explosive device (IED). The blast resulted in catastrophic injuries to both legs, a deep wound in the right forearm and the amputation of the tip of his left index finger. SSG Gibson has no memory of the nearly fatal explosion that day, which occurred three months into his third deployment.

Following his medical evacuation from the battlefield to Kandahar Airfield Hospital, and then transported to Bagram Air Force Base, Jason would also be treated in Landstuhl, Germany. There, doctors worked feverishly to save his right leg, but he was becoming septic and had lost profound tissue from his thigh, requiring doctors to amputate the right leg as well (called a bilateral hip disarticulation).This rare form of amputation accounts for about two percent of the country’s amputee population. So far in their journey, SSG Gibson and his wife Kara have only heard of four other Soldiers with this level of amputation.

Weeks later, SSG Gibson was moved to Walter Reed where he underwent almost 20 surgeries, including a skin graft on his arm, as well as aggressive physical and occupational therapy.

Jason enjoys handcycling, surfing, golfing, skiing, fishing, sled hockey, and being an active member in his community with the Church of Christ. Kara would like to resume her career as a physical therapist. She has supported her husband during every step of his rehabilitative exercises, and blogs about her experiences as the wife of a wounded Veteran.

The couple became parents to a baby girl shortly before receiving their specially adapted home in 2014. Jason has earned his private pilot’s license, is studying civil engineering at Ohio State and working for the Department of Transportation. He received national recognition as a guest of the First Lady at the President’s State of the Union Address in January 2015. 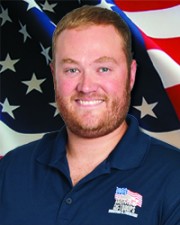