Unsure of his plans after high school, Erik Galvan felt the military was a good opportunity to see the world. Inspired by his Marine brother, he joined the 1st Battalion, 5th Marines as an Infantryman.

In March 2011, Lance Corporal Galvan, then 19-years-old, set out on his first deployment to Afghanistan. On June 15, 2011, LCpl Galvan was on a patrol when he lost both legs and his right hand in an improvised explosive device (IED) explosion. All LCpl Galvan remembers from the incident is his body going numb, rolling over and feeling like going to sleep.

Erik had most of his surgeries at Walter Reed Medical Center before transferring to Brooke Army Medical Center in San Antonio, where he remained for two years.

After retiring in 2013, Erik moved to California where he now lives with his wife Kaitlyn and young son Logan. He earned his master’s in social work at the University of Southern California in 2019. He is also involved with Wishes for Warriors, a nonprofit organization dedicated to helping combat-injured Veterans experience therapeutic outdoor activities. Erik believes a specially adapted custom Homes For Our Troops home will give him the ability to focus on these endeavors and his education.

At the end of the day, Erik’s prosthetics cause pain and discomfort so he prefers to rest in his wheelchair. However, his current home is not accessible so he has trouble navigating most rooms. This is frustrating for Erik, as he loves to cook. “My current home is almost like a prison because the only place I can be is one room,” he says.

A new home will alleviate many of the challenges Erik experiences in his current home. He will also be able to get back to whipping up dishes in a kitchen with lower countertops and pull down shelves. The home will also benefit Kaitlyn, knowing Erik will be self-sufficient when she’s away.

Originally from Texas, Erik is choosing to remain in California to be close to school.

Erik and Kaitlyn say HFOT is a blessing and are grateful to HFOT’s donors and supporters. They look forward to raising their son and becoming active members of their community in the comfort of their forever home. “Thank you for your support to our Veterans as they rebuild their lives and return to a sense of normality. Without your dedication and donations, none of this would be possible,” Erik says. 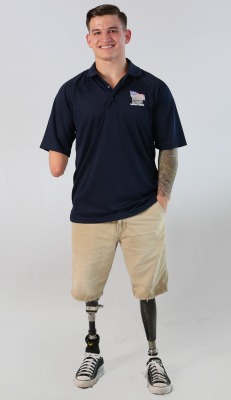