On Dec. 19, 2005, while accompanying his platoon leader on a routine mission near Yusufiyah in what was referred to as the “Triangle of Death” south of Baghdad, Army Sergeant Noah Galloway’s vehicle drove into a trip wire that ignited a roadside bomb. In the aftermath of the blast, which thrust the vehicle into a canal, the platoon leader would find SGT Galloway’s bloodied helmet, and later, a severely injured Galloway, legs mangled in the wreckage.

SGT Galloway was rescued from the site and returned to the abandoned potato factory where his unit had taken up quarters. He was then evacuated from the site and brought to Bagdad. Six days later, on Christmas, SGT Galloway woke up at Walter Reed Medical Center, with no recollection of the blast. His mother would then deliver him the devastating news: the bomb took his left arm above the elbow and his left leg above the knee. Perhaps the biggest source of inspiration during SGT Galloway’s recovery has been his father, Andy, who lost his arm at a young age in a work accident.

A fitness fanatic, SGT Galloway regularly competes in endurance races and travels around the country for motivational speaking engagements. SGT Galloway is humbled by the opportunity to receive a new home to suit his individual needs. In 2010, he witnessed the impact of a specially adapted home from Homes For Our Troops when he first volunteered for HFOT and helped construct the home of fellow injured Soldier, SSG Scot Noss, in Trussville, Alabama . As a busy father with three children, he takes comfort in knowing that in the future he will be able to stay actively involved helping other Veterans around the country while not having to worry about where he will live.

Like countless other injured veterans, SGT Galloway feels that many of his fellow wounded Soldiers are “more deserving” of a specially adapted home, downplaying his own need for one because of his capabilities. While he dismisses being labeled “handicapped” or “disabled” in light of his physical fitness and his prowess on extreme fitness challenges and obstacle course races, SGT Galloway acknowledges that the gift of a new home from Homes For Our Troops now safeguards his future health, since it prevents him from accidents and falls that would otherwise occur in a traditional or non-handicapped accessible home.

In his previous home, SGT Galloway could not use a wheelchair, which was problematic when he wanted to rest his legs and remove his prosthetic. His new home with widened doorways alleviates that burden. Additionally, SGT Galloway recognizes that as he ages, his health and dexterity may deteriorate, putting him at greater risk of injuring his existing (“good”) limbs should he slip and fall. The home’s other safety features, including hold bars in the shower, carpet-less floors, and accessible kitchen cabinets, therefore, assures that he stays independent, healthy, and strong now, and in his later years, too. “I like to be tough and push myself to every limit. But this is my home, this is where I need to recover and I can do that here,” Noah says.

SGT Galloway is committed to help “Pay it Forward” by advancing the mission of Homes For Our Troops throughout the country, and by being a positive role model and inspiration to others, especially our nation’s severely injured Veterans.

In November 2014, Noah was on the cover of Men’s Health magazine after winning the magazine’s Ultimate Guy Competition. He competed on ABC’s Dancing with the Stars, and finished third overall in the series. 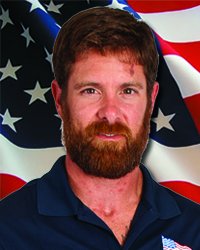