Marine Sergeant Toran Gaal has no recollection of the incident that occurred on June 26, 2011, when an improvised explosive device (IED) detonated beneath him, resulting in the loss of both leg and severe brain injury. Sgt Gaal was serving with the 1st Battalion, 5th Marines in Sangin, Afghanistan, and was on his third deployment. Ironically, just the evening prior to the explosion, Sgt Gaal had announced to his unit that he was reenlisting.

Sgt Gaal would wake up from a coma two months later under the impression that he was still in high school and had been in a car crash and had no memory of ever being a Marine. Following his medical evacuation from the blast site, he was transported to Bagram and then to Landstuhl, Germany, and was then brought stateside to Walter Reed National Military Medical Center (Bethesda) where he stayed for seven months. Eventually, he was treated at the VA in Palo Alto for his brain injury and then on to Balboa Naval Medical Center in San Diego, and was later medically retired.

In January 2012, Toran took his first steps on prosthetics, which gave him, as he says, “a whole new level of what satisfaction means.”  He credits the strides he has made in his recovery with the many people he has met who impacted or motivated him in some way.

Toran’s specially adapted home from Homes For Our Troops eases much of the pain he still feels on a daily basis. By the end of the day, Toran is most comfortable in his wheelchair and he did not have full accessibility at his previous home. Having an open kitchen and being able to cook for family and friends when they visit is a huge benefit. Not bumping into the walls of narrow hallways or being confined in small spaces also makes life easier for him.

A mortgage-free home provides a safe, worry-free environment for Toran and his wife Lisa. He has interned with several publicly traded companies and has also worked within the House of Representatives with Congressman Duncan D. Hunter. He would like to build on those professional experiences in the future. Living in a safe home built around his needs where he is not likely to slip and fall ensures he stays healthy and strong and becomes more self-sufficient.

Toran has also started to surf and swim as part of his recovery. He also coaches youth league basketball and works with the Young Marines.The summer of 2015 Toran hand-cycled across the country to raise money and awareness about fellow injured Veterans.

To the supporters of Homes For Our Troops, Toran would like to say, “Thank you…the support has been and will continue to be a huge inspiration and motivation for me to be better and give back even more to my country.” 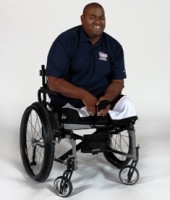