Joining the military was something Jordan Folmar always wanted to do since he was a child. He enlisted in the Army as an Infantryman with the 1-508 PIR, 4th Brigade, 82nd Airborne Division, first deploying to Afghanistan in 2009 and again in 2012.

On July 6, 2012, during his second deployment, Sergeant Folmar was on a dismounted patrol in Zhari District, Afghanistan, when he stepped on an improvised explosive device (IED). SGT Folmar lost both legs above the knees and sustained blown-out eardrums in the blast.

Jordan spent almost two years undergoing surgeries, rehabilitation, physical therapy, and learning how to use prosthetics at Walter Reed Medical Center. He is now a stay-at-home husband, father, and baker for the cookie business he and his wife Amanda run. It is difficult for Jordan to fill all three of these roles in his current home because it is not adapted. He often becomes frustrated that he cannot access most rooms, including his daughter’s, in his wheelchair because the doorways are too narrow. He also becomes discouraged while baking because he cannot reach any of the cabinets from his wheelchair. “Having a fully adapted HFOT home will be life-changing. No more crawling on the floor to get into my daughter’s bedroom to say goodnight, no more putting on my prosthetics to go out in the front yard, no more standing up on my wheelchair just to reach a glass for water,” he says.

The financial freedom of the HFOT home will be beneficial for Jordan and his family also, as they would like to expand their cookie business. Currently, Amanda works during the day, and spends evenings and weekends decorating cookies and filling orders. Jordan says they would eventually like to be in a position where Amanda could leave her job and expand the cookie business full time.

Originally from Texas, Jordan is choosing to remain in the state and build his home in the Austin area for the excellent school district.

Jordan wants HFOT’s donors to know he is grateful for their support. “Without amazing people like yourselves, HFOT would not be able to continue their mission of building specially adapted custom homes for severely injured Veterans. You are literally changing hundreds of people’s lives with your generosity,” he says. “These Soldiers, Sailors, Airmen, Marines, and their families are all living more comfortably.” 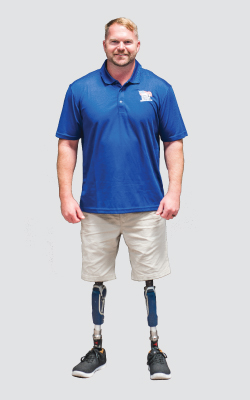