Sergeant Christopher Fesmire joined the Marines when he was 19-years-old because he wanted to get out and see the world and have some adventures. He served for four years and then was called back in 2004 to serve in Kuwait. Chris says that being called back to the Marines was like “coming home.” After serving in Kuwait, Chris volunteered for another mission, this time he was to serve in Iraq. It was there that a landmine exploded under his HMMWV and caused him to lose both legs above the knee.

Homes For Our Troops built the Fesmires a beautiful home on their land in Hartsel, Colorado. Thank you to HFOT’s donors and supporters who contributed to the building of Christopher’s home. 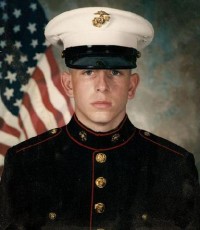