Matias Ferreira was born in Uruguay, and immigrated to the U.S. (Atlanta) with his family when he was six, joining the Marines at 19.  He took his oath to become an American citizen in September 2010, days before he deployed to Afghanistan as a machine gunner with the 1st Battalion, 8th Marines.

Just months into his first deployment in January 2011, Lance Corporal Ferreira lost both legs and broke his pelvis after stepping on an improvised explosive device (IED) in Helmand Province, Afghanistan. Treated by a Navy Corpsman and medically evacuated to Bagram (Afghanistan) hospital, he was flown to Landstuhl, Germany, and then brought to Walter Reed Army Medical Center in Bethesda, Md. There he underwent several surgeries and aggressive therapies. Months later, he eventually learned to walk confidently on prosthetics, advancing to running, and other sports a short time later. He was medically retired in May 2012. Matias is now a police officer for the Suffolk County Police Department in New York. In his free time, he enjoys playing hockey, golf, and softball. He has also run half marathons.

Matias previously lived in a traditional home in Wantagh, N.Y.  The stairs and narrow hallways presented mobility issues for Matias on a daily basis.

To honor the service and sacrifices of this Marine, Homes For Our Troops built Matias and his family a specially adapted custom home on Long Island, N.Y.  The home features over 40 major special adaptations, including widened doorways for his wheelchair, a roll-in shower/bathroom, and pull-down shelves and lowered countertops in the kitchen. These features allow him to live barrier-free and stay independent when he chooses to be in his wheelchair while going about his daily activities and routine at home. Not having a mortgage payment also removes the burden of paying costly N.Y. monthly rent, allowing Matias to focus on his recovery and rebuilding his life.

Matias is appreciative of HFOT’s supporters for giving him and other Veterans the opportunity to live their lives with less stress and complications. “We are forever grateful for all that you have done and continue to do for people like myself,” he says. 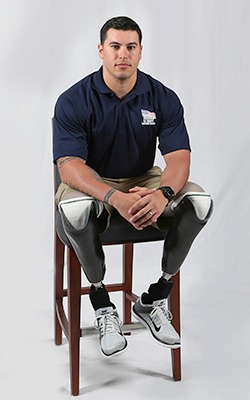